Dalia Vias-Fradera, a travel sales agent by day, has been a songwriter for decades. Here are some insights into her creative process, tips for recording music and details for buying her CDs: 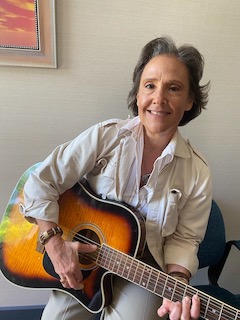 How long have you been writing music, and what inspires your lyrics?

The very first song I ever wrote was when I was 11 years old. It was in Spanish and I suppose it was inspired by the Spanish culture and environment I suddenly found myself immersed in during my family's first visit ever to Spain. Prior to that, I wrote poems galore, but, once I was inspired to add the melody, poems alone never really did it for me anymore. Music guides us as to what to feel and how to feel. So, I quickly found writing songs, versus writing just poems, a much better and more powerful channel for communicating feelings, thoughts and ideas.

How did you get started writing music and recording songs?

I met the studio owners through a friend I had worked with before. One day, I wrote a song named "Everything," which required more than just a piano (specifically, an electric guitar). Until then, I had only written ballads, so the piano always more than sufficed. So, in short, I bit the bullet and called the studio to set up an appointment. I just never had previously because I was kind of intimidated. But once I recorded the first song I was SO hooked!

How does the process of writing music and lyrics work for you?

Probably because I "write" music and songs, I don't know how to READ music and, therefore, only hear it in my head. The lyrics I write down of course, but the accompanying music and arrangement is all in my head until I get it recorded. So, once at the studio, I would sound it out to the studio guys, Bob and Rich. I would also use the keyboard for every single sound and instrument you can imagine.

Can you share an example describing your experience of recording music?

One song called "Redlight Blues" requires a saxophone, so I played the saxophone sounds on a keyboard. It was so very exciting to get my music out of my head and out into the world!! I can't even begin to tell you! I would get home from the studio usually around 2 am but was so exhilarated I wouldn't even be tired. It was so much fun and so satisfying. Bob and Rich were so funny and so much fun to work with, it wasn't even "work."

How did you end up producing a CD with your songs?

Eventually, I had recorded enough songs to actually put together a CD. I named the CD "Connection." I also designed the cover. To this day, there isn't a note on there I would change.

Did you record any other CDs with special features?

I recorded another CD but with Spanish songs this time. That one only has 6 songs on it versus "Connections," which I has 10. There is more of a VOCALS emphasis on the Spanish recordings, versus the English CD, which I feel is more INSTRUMENT- and MUSIC-driven. But I'm proud of all of it.

Have you written other songs, and how many of those could be recorded?

I have hundreds of written but unrecorded songs. I think about one third merit recording. Yet every single one proved a learning experience and so I feel in some way helped in later crafting the ones that do merit recording.

How would you advise other song writers who are interested in recording their music?

I personally lucked out in actually knowing someone who had two friends that owned a Record Studio. If I hadn't, I guess I would have had to shop around for area studios that I felt would work well with me. Because everyone's needs are different, based on their level of talent and/or expertise, I would advise anyone looking to record their own music to shop around and go with someone they will feel 100% comfortable with, spending hours upon hours with and being comfortable to be honest regarding their creative opinion and input. They are your songs after all so you should always feel your opinion is valued and taken seriously.

Why do you think music is a healing force, which particularly helped during the pandemic?

Music is not only an international language but a great common denominator, unifying us tightly with people we don't even know, To give you an example, when I was in college, I was waiting for one of my classes to start in the large foyer into which music was getting pumped and students were coming and going from classes and sometimes congregating and socializing before or after their class. Suddenly, David Essex's "Rock On" started playing. With just the first few notes I was magically transported to 7th grade, walking home on a warm Spring day. Just as I was relishing that private memory, two girls passed me, and one exclaimed, interrupting their conversation, "Oh, wow! That song reminds me of 7th grade!" Seconds later they were gone. I did not know those girls, yet I found it so very curious that that song was a bond between us, because it reminded us of the same point in our lives. That is just one of the beautiful things about music. It transports us, it unifies us, it excites us, it relaxes us, it motivates us.

Would you like listeners to know anything else about your music or creative process?

While there are some songwriters than can write songs at will, mine are written strictly via inspiration. To be inspired, I find I need quiet time to myself. Other songwriters, like Steve Perry, for example, the ex-lead singer of Journey and one of my all-time favorite singers, said once in an interview that he required a "funky environment" to get inspired. MY inspiration usually begins with a slight tightness in my chest, a physical response I guess to something emotional that needs to "get out." I say the song tells me when it's time to be written, not the other way around. I also need the quiet environment because I feel I need to "tap into" a song which has already been written. In other words, every time a note or lyric "comes to me," it's already somewhere "out there" in the Universe, just waiting for someone like me to hear it and share it with the world. I see myself as basically a "channel" of the Universe's music. And, while I have experimented in the past with writing songs at will, based simply, for example, on a title or scenario, I feel my very best songs have been those written solely from pure inspiration.

Please share this article with other music lovers! Then, buy the CD Connections on www.artsphoriashop.com.

Would you like to advertise your creative work on Artsphoria? Reserve space now: